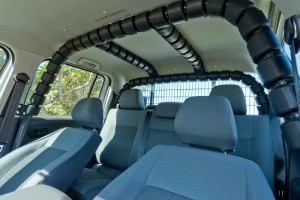 Roll Over Protection Systems (ROPS) were first developed in Sweden in the 1950s to protect tractor operators in the event of a tractor rolling over or flipping backwards. ROPS legislation for tractors in Australia became mandatory in 1982. Since this time, there has been a 72 per cent decline in roll over fatalities. Studies by Safe Work Australia found that from 1989-92 there were 40 roll over deaths compared to 17 from 2004-2007.

The decrease in tractor fatalities is strongly linked to the legislation requiring all tractors built after 1981 to be fitted with compliant ROPS (AS1636).

ROPS on tractors save lives.

Such is the importance of ROPS for farming equipment that state authorities in New South Wales and Victoria have adopted rebate schemes to financially incentivise farmers to retro-fit ROPS to existing tractors. In stark contrast, while much has been done to recognise and address the issue of tractor safety to protect farm workers, little has been done to protect occupants of commercial vehicles. There are currently no legislation governing roll over protection, roof strength or roof strength testing for commercial vehicles in Australia.

According to the Australian Bureau of Statistics, there were over 169,000 road fatalities in Australia between 1925 and 2003.

This death toll surpasses the number of Australians killed in the four major wars in which Australia was involved (I, II, Korea and Vietnam).

Since 2003, the average fatality rate has been approximately 1,300 vehicle related deaths per year. In March 2012 alone, 104 people lost their lives on Australian roads. The majority of these recent accidents involved single vehicles travelling during the day on weekdays at 100kph (Source: Department of Infrastructure and Transport). According to the Australian College of Road Safety, roll over crashes account for approximately 22 per cent of passenger cars in fatal crashes in Australia. In these cases, severe injury risk is increased through the lack of occupant safety designed into the vehicle.

How many deaths could be avoided with increased roof and vehicle strength?

In relation to road going vehicles, Mercedes Benz was the first to launch roll over protection for passenger vehicles with the two-seat Roadster Convertible in 1986. Volvo followed with roll over hoops in the C70 convertibles during the 1990s and in 2001, Jaguar developed the Adaptive Restraint Technology System for their XK series.

Anecdotally, the roll over protection for passengers in these vehicles has been increased resulting in fewer injuries and deaths. However despite the increased protection that roll over systems create, the Federal Office of Road Safety reports that there are currently no rules covering the strength of the roofs of passenger cars in Australia. The situation is particularly worse for occupants of four wheel drives and light commercial vehicles.

A study by Victoria’s peak motoring group (RACV), shows that drivers of four wheel drive vehicles are more than three times likely to die in a roll over crash than those in ordinary passenger cars.

The roll over concern is magnified when vehicles are operated in non-urban environments. For example, 44 per cent of occupant fatalities occur in rural Western Australia and 54 per cent in the Northern Territory.

This places mining operators, their contractors and employees at increased risk as the most common vehicles used on sites, four wheel drives, are typically driven in non-urban environments. The higher centre of gravity, increased capacity, rough terrain and driver fatigue also increases the likelihood of a four wheel drive roll over in a mining situation.

Drivers of 4WDs are more than three times likely to die in a roll over crash. Protect the roof and you protect the occupants.

Roll overs can occur through speed, cornering, driver inexperience, sub-standard road conditions, overloaded vehicles, fatigue, collision with another vehicle or object, or traversing a critical slope. These accidents can happen to the most experienced drivers regardless of the time of day and on any surface.

However, the main source of severe injury risk is less from the collision and more from the lack of occupant safety designed into the vehicle.

Without roll over protection, the strength to weight ratio of the structure above the dashboard is insufficient to maintain adequate occupant survival space, i.e. the roof caves in and crushes the occupants. (see diagram below)

In a roll over, roof crush occurs when the vehicle’s roof and pillars come into contact with the ground and fail to withstand the weight of the overturned vehicle. The windscreen and windows smash and occupants may be fully or partially ejected.

The severity of occupant injury may be reduced if quality seatbelts are fitted correctly and are being worn at the time of impact, and side curtain air-bags are in place and deploy efficiently, although neither initiative protect the occupants’ survival space.

When quality roll over protection systems (ROPS) are fitted to a vehicle (as seen in the Minecorp equipped vehicle below), they minimise the effect of roof crush.

ROPS protect mine site employees from serious injury and death.

The ROPS provide much needed strength to the B and C pillars of the vehicle when it is overturned and assist to maintain the occupants’ survival space.

The majority of safety-conscious mine operators and contractors have enforced the use of ROPS for light vehicles in the resources industry. It is important to note however that ROPS are much more than a “gate pass”. Not all ROPS manufacturers engineer their ROPS with the right strength and flexibility to absorb the energy created by the accident and protect the occupants. In fact, some poorly constructed ROPS can cause more harm than good.

Enquire now and solve all your fleet problems